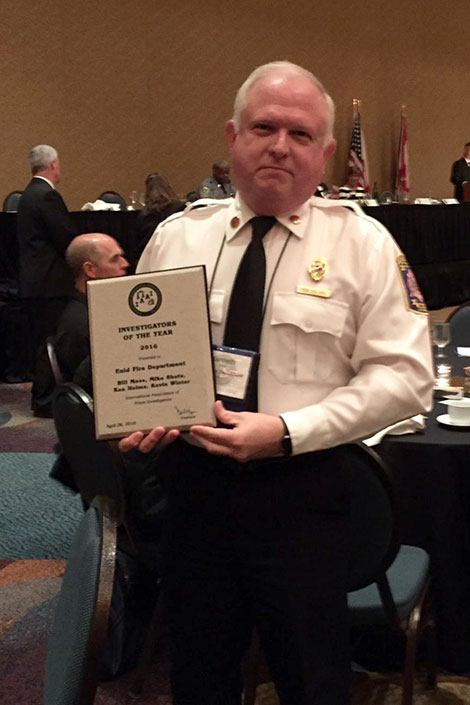 Enid Fire Department Fire Marshal Ken Helms was present to accept the 2016 Investigators of the Year Award Tuesday from the International Association of Arson Investigators at their 2016 Annual Training Conference in Orlando, FL. The award was presented to Helms and Assistant Fire Marshals Kevin Winter, Bill Moss & Mike Schatz.

The team was previously awarded the Investigator of the Year honor by the Oklahoma Chapter of the IAAI in October of 2015, after the successful conviction of Martin R. Painter for setting a fire in the vacant structure located at 424 S. Grand on May 11, 2014. Painter is suspected of setting a number of similar fires from 2010 thru 2014. The IAAI-OK Chapter then passed the nomination up to the parent organization for their consideration.

The International Association of Arson Investigators (IAAI) is the largest professional organization of fire investigators in the world, providing training, certification and leadership to the profession. The IAAI has more than 8,700 members in 80 chapters worldwide who work in all aspects of the fire investigation profession, including the fire service, criminal justice system, legal profession, the insurance industry, and science engineering disciplines.

The IAAI is committed to accuracy in the fire origin and cause determination, and provides and supports training and professionalism under recognized standards and guidelines promulgated by the National Fire Protection Association (NFPA).

“We are extremely honored to receive this award from such a highly respected group of professionals.” Helms said. “When your job description is “fire prevention” your success is often measured by a reduction in your failure rate. We don’t know when we’ve prevented a fire, we only know about those we failed to prevent. But, in this case we believe our efforts removed a serial arsonist from the community and are confident that additional fires have been prevented.”